Yes, I’m turning the big 49 today, and in celebration, I’m going to tell you the 49 games I’m really anticipating over the next few months.

Ok, no. I’m not that much of a masochist.

Instead, the number 4 is part of 49, so here are four games that I really can’t wait to get to the table this Fall.

This game, the subject of my post about “play-testing playthrough” videos a couple of weeks ago, is one that I’ve been anticipating since it was announced. My desire for it only increased after watching videos like Girls Game Shelf and the Secret Cabal.

Basically, this is a game where players are scientists tasked by Frankenstein’s monster to build him a bride (or companion, anyway).

It’s a very dark theme, where you’re going around the board collecting body parts (even perhaps going as far as creating your own supply of them through murder), but essentially it is a worker placement game.

You use these body parts to help you build your very own monster.

You can be as evil as you want to be in the process, but if you lose all of your humanity, you will lose a lot of points at the end of the game (not to mention making things harder on yourself during the game)

It was unfortunately delayed due to a production issue, but apparently is due to be released on September 27. I have it on a pre-order already, so it better come soon after that!

I have to turn in my nerd card, sadly.

I have not seen the movie Tremors.

That being said, I know enough about it to know that this is kind of Tremors: the Board Game.

Game the Game did a great playthrough video of it, which just kind of reinforced things.

In the game, you are driving around the Nevada desert trying to elude these massive worms that were produced through government experiments (because of course it’s the government’s fault) and collect eggs to deliver to certain locations around the map and meet bounties.

The chaos that surrounds this game sounds amazing. I even got to watch a few turns played when I was at Dragonflight in August, and it looked wonderful.

I can’t wait to be involved in all of that mayhem.

Sadly, this is in my pre-order with Abomination, so I won’t get to play it until October. 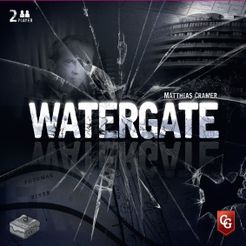 The first of two games that I have to blame Heavy Cardboard for (my wallet really hates Edward and company right now).

This is a 2-player game that takes about 45 minutes to play, which makes it perfect for lunch. It is, of course, about the Watergate scandal.

One player is the Nixon Administration trying to fend of investigations into the scandal. The other player is the Washington Post editors, trying to link chains of evidence until they finally meet in the middle at a picture of Nixon.

It’s a card-driven game where both players have their own decks (so not like 13 Days or Twilight Struggle).

Each player will be playing a card on their turn that will affect the flow of evidence, or perhaps the momentum of the investigation. Perhaps informants will be played, and that’s when chaining the available evidence becomes an issue.

It’s a back and forth tug-of-war, and watching it in action made my mouth water (the game already sounded kind of interesting).

Sadly, this one is also in that pre-order, so waiting for Abomination to come out.

This one is getting played very shortly after it comes, though. I’m chomping at the bit.

This is a recent addition (last Thursday, actually) and again was added after watching the Heavy Cardboard playthrough.

This is a tableau-building, tile-laying game about creating a world. You are forces of nature shaping the world as it forms, laying down grasslands, deserts, trees, mountains, and oceans from the available elements.

The building blocks of life, don’t ya know.

Each player will have cards in front of them that require these elements to power them up. Each turn, a random element is drawn from the bag, and then the fun begins.

These cards will let you lay tiles to the continent, add animals to available habitats, get points for those habitats or animals, and maybe (just maybe) screw with the other players by forming the world a bit differently than they would like (because they want to get a lot of points and you just plopped a desert down where they wanted to put a grassland).

I had heard of this game before but it didn’t really jump onto my radar.

Then I watched the playthrough.

It looks so beautiful and the gameplay looks amazing!

This one is sadly not coming out until late October or early November, so it’s in *another* pre-order (I wasn’t going to be delaying all of these other games just for this one!).

Except, you know, a bunch of Kickstarters that are scheduled to be arriving this Fall as well.

Guess I better get ready to punch some counters!

What games are you looking forward to this Fall?

And how many of them would you like to buy me for my birthday?

Let me know in the comments.