When I was growing up, I was a DC Comics fanboy. Sure, I followed some of the Marvel stuff too, but DC Comics was where it was at. I got my start with the 1980 version of Teen Titans written by Marv Wolfman with art by George Perez.

That series was phenomenal and I quickly jumped to many of the other DC heroes (though surprisingly I was never a big fan of Superman).

While I don’t follow comics much anymore, and I became much more of a Marvel guy as time wore on, I’ve always had a soft spot in my heart for DC.

Why am I telling you my comics history?

Because today we’re going to be looking at the DC Comics Deck-Building Game, published by Cryptozoic Games. The game is designed by Matt Hyra and Ben Stoll, and there is no artist listed on Boardgame Geek. It plays 2-5 players.

I’m only reviewing the base game, which came out in 2012, though there are a ton of expansions for it.

Should you try it out?

While there are some similarities to the Marvel Legendary system, this game is very much a competitive game rather than the semi-cooperative that is Marvel.

Players take the role of one of the major DC iconic heroes, such as Superman, Flash, Batman, Wonder Woman, Green Lantern, Aquaman, or Cyborg (Editor – One of these things is not like the other…).

Then, as with all deck-builder games, each player gets a starting deck of cards (Ten in this case, though some games like Legendary do have twelve).

In most cases, starter cards are pretty weak but they do give you some benefit. Not in the DC Comics universe, though!

The “currency” in the game is Power, and cards will either give you some power or let you do other things based on what the card says. A Punch card will give you one Power that you can use during your turn.

What would a hero be without a super-villain to fight? Or, say, eight?

There is also a deck of Super-villains to defeat. While the game comes with 12, you only use 8 in a game unless you want to lengthen the game beyond any human imagining.

You always start with Ra’s Al Ghul on top of the deck. When he’s defeated, you will turn over the next one and that Super-villain will have an First Appearance attack that will harm you in some way unless you have a Defense card.

Unlike Marvel Legendary or many other deck-builders, you only have Power as a currency. There is no separate “fight” to fight villains and “recruit” to gain other cards. You use your Power to take whatever card you can afford from the market row. 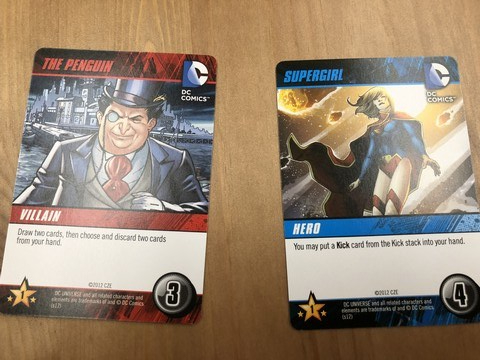 Whether it’s a Hero, a piece of Equipment, a Super Power, or (yes, that’s correct) a villain, it goes into your discard pile for you to use later.

The same goes if you have enough Power to defeat a Super-villain. That card still goes into your deck for you to use as well. And that card is going to be even more powerful than what you can get from the market.

Play goes around until the Super-villain deck is empty. Then you count up the points (the stars on the bottom left of the card) in your deck and see who’s the winner!

Is the DC Comics Deck-Building Game more powerful than a locomotive? Or is it weaker than Superman wearing Kryptonite underpants?

Having been a fan of Marvel Legendary for so long, there were a few concepts I had to “unlearn” when playing the DC Comics game. Only having one currency was the main thing, but also adding villains to my deck was another.

It just seems so weird.

But once I got past it, I did really enjoy this game.

There are, however, a few issues I’ll mention before being somewhat positive.

First, thematically the game is kind of a mess.

You are Superman, or Wonder Woman, or whomever.

Yet you can go out and buy the Batmobile, or Batman’s Utility Belt, or Green Lantern’s Power Ring to use.

Not to mention that each hero has a representation in the main card deck too. While you can be Superman, somebody else could recruit the Man of Steel card.

Say what? Talk about schizophrenia!

Don’t get me started on why these villains, or even the Super-villains, are going into your deck and helping you out after you defeat them. I know heroes and villains have sometimes had to team up to defeat a bigger adversary in the comics, but this just seems a bit much.

It’s fun as long as you don’t try to make sense of the theme. I find it works better in my mind if I don’t really think about it.

Which brings to mind my second major problem with this game.

Power creep and runaway leader is a major issue, at least in a 2-player game. Maybe not as much in multiplayer (I’ve only played a 3-player game once) though even then I could see it potentially being an issue.

The Super-villains are really powerful cards. Even the first one, Ra’s, has +3 Power on his card.

As you can see, Sinestro gives you the ability to look at the top card of the deck, destroy it and gain +3 Power if it’s a Hero or gain it into your hand if it’s something else.

Once somebody starts defeating Super-villains, it’s quite easy for them to run away with the game if the other players aren’t able to start doing so as well. You get one Super-villain, and when that one comes up in your hand you’ve probably got other strong cards, so you can probably take down another one, etc.

It doesn’t happen all of the time, but it does enough that I have to make note of it.

The game is fairly simple to play and teach, which also makes it an ideal lunch time game with people who may not be wholly familiar with basic game mechanics. Thus, it would be hard for the rule sheet to go wrong, but it is fairly easy to follow.

It’s kind of sad, because I would really like to play a meatier DC Comics game.

The artwork on the cards is really good. Since the artist(s) are uncredited on BGG, I’m assuming these are usual comic book artists and most of them are well done (though I don’t really like the Supergirl card pictured above).

The card quality is pretty good too. My co-worker’s copy has been played multiple times and they are holding up to the punishment even as they are unsleeved. The insert also fits the cards really well, though I don’t know if that will be the case if any expansions are added to the mix (and apparently there are a lot of them).

Overall, I would say that the DC Comics Deck-Building Game (Could they have come up with a more generic name?) is a decent game. It’s fun to play at lunch, but if I had more time, I’d go with Marvel Legendary for my superhero fix. I wouldn’t mind trying one or more of the expansions to see whether that changes things for this one.

Essentially, I’m glad my co-worker has it because I do enjoy playing it with her, but I’m also glad it was free (a prize for volunteering at SHUX) as I’m not sure I would want to pay for it.

Give it a try and see what you think. I would not recommend picking it up without playing it first, however.

That could lead to some tears.

This review was written after 6 plays