It was actually a pretty light month for new to me games. Between being sick and missing two game days/nights and then actually playing a few games multiple times, the new experiences were few and far between.

In fact, I only have two new games, though I finished the month on Sunday with a new expansion for an awesome game.

Because I was so “Cult of the New” last month, this month I went old (and one of them was really old!). My only 2017 experience was actually the expansion.

So, without further adieu, here we go! 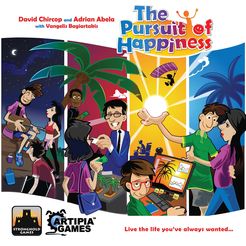 Last year, I kickstarted the Community expansion to The Pursuit of Happiness because the game itself looked really cool. I had never played the base game, so I included that in my pledge so I would get both.

In January, I played both the base game alone and one game with the expansion, and greatly enjoyed them.

The Pursuit of Happiness is basically a more advanced (and much better) version of The Game of Life. There is no spinner in this one, and you’re not randomly landing on certain spaces and having stuff happen to you.

Instead, you are making decisions on how to live the best life you can for long-term happiness (you know, victory points).

This is done through using your hourglasses (time that you spend during each stage of your life) to do actions. You can either gain resources (knowledge, influence, creativity), get a job, start a relationship, or spend some money (for either an activity or an item) that will make you happy.

I’m not going to go into full detail (I’ll save it for the review when I get to it), but that’s basically it. You are just trying to be as happy as you can be before you die (don’t let that “dying” part of the theme keep you away).

It’s a really great game that I enjoyed a lot. It’s a bit long, though that could just be because we were all new and I was trying to teach it without having played it. I will reassess that with more plays.

We broke out the Community expansion at CascadeCon in Bellingham, Washington, and it added a fair bit. This adds new cards but also adds the Community action. These Community cards show how you interact with the people around you.

We also used the “Friends” mini-expansion that was part of the Kickstarter. That is a good way to get some resources as long as you do it before your neighbour does each turn (only one of you can do it on a given turn).

The Community cards are kind of cool and I like that it adds the “Popularity” function to the game. The more popular you are, the more points you get at the end of each turn and also the more community actions you can do.

It was fun, but it may have added some length to a game that didn’t need it. Again, I’ll have to reassess with another play because this was our last game of the night and things were starting to drag. People were getting irritable, so it wasn’t as fun as I think it could have been.

I’ll report back once I have a “normal” play of this expansion. 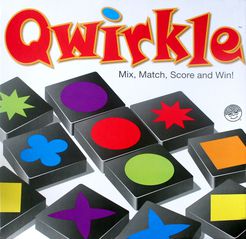 This is a classic dominos-type game that I for some reason had never played.

However, we were waiting for some people to arrive at CascadeCon and this was a simple and short game that was in the game library, so we picked it up.

This was a ton of fun for such as simple game.

You get points based on how many tiles are connected to the one you placed, and if you complete a row or column of six tiles (either six different colours or six different shapes), you get extra points for forming a “qwirkle”.

This was a lot of fun. Pretty simple, it did take a bit longer than what I think it should, as it started to drag towards the end.

But it’s a fun little game.

The previous expansion to the award-winning Terraforming Mars was just a double-sided map with new Awards and Milestones. It was cool, and the maps were really nice, but there were no new cards, no new corporations.

It also allows you to do some terraforming of Venus as well.

You can see the Venus board off to the side on the right.

Venus adds a new terraforming parameter that will also increase your Terraforming Rating (i.e. points) along with a new tag (Venus…I know I’m shocked!) and a new card resource (floaters).

I’ve only played it once, but I played with the corporation that specializes in floaters, and was able to make good use of the Venus tags and the floaters to pull out the win even though I only ended up placing 4 tiles on Mars itself.

The new cards are interesting, as well as the new milestone and award. I only know one of the corporations, obviously, but they look really intriguing. And I found that Venus didn’t detract from the rest of the game at all.

It just gave you more options.

I definitely want to try this one some more to see whether it continues to work or whether my positive thoughts are based on me winning.

Because we all know that I’m all about the winning.

What new games did you play in January?

Let me know in the comments.